Svetla operates the super heavy multi-turret tank, GIP-03 Bergenia, alongside two guerrillas. She balks orders from the back of the Bergenia, while the two guerrillas each operate an individual "tower" of sorts to fire projectiles and also protect her from incoming attacks. The Bergenia can also change forms to fire a salvo of explosions, is equipped with a self-repair kit and provides increased resistance against explosive and incendiary attacks.

She wears a somewhat revealing suit (though nowhere near as Veronica's), intended to seduce male opponents into lowering their guard.

Should the GIP-03 Bergenia be severely damaged, Svetla and her two guerrillas will flee from the battlefield on the remaining intact part, whisked away by a Ptolemaic MH-6.

First appearing in "Secret In My Eyes", Svetla is seen talking with Veronica, where they express concern that they will not be able to withstand an attack by the Regular Army, as they are outnumbered five to one. They decide to take a risky maneuver by pulling off a honey trap to seduce the enemy commander, Tarma. Svetla instantly seduces Tarma due to her appearance, allowing Veronica to move in and attack.

As Tarma is distracted by Svetla, Eri then orders the Regular Army bombers to bombard the Ptolemaic heavy weapons. Svetla is momentarily distracted before Veronica snaps her back to reality and drags her away before she is also bombed. 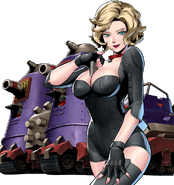 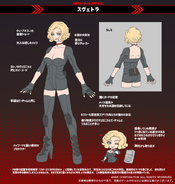