Swordeist is a new character introduced in Metal Slug Attack.

An Invader taking on the form of a massive scimitar, Swordeist is carried onto the battlefield by a large machine known as a responder unit that has a pink hue to it. The responder unit allows her to perform additional attacks, move across great distances and even comes with built-in repairing technology, but is operated by a simple AI.

She shows great interest in swordsmanship, having traveled to Earth to meet the swordmasters there. She is very chatty and sensitive about her body, lamenting the fact that she is nearly useless if her responder unit isn't there to help her.

If she becomes severely wounded, her blade will shatter, prompting the responder unit to retreat from the battlefield.

First appearing in "Try Line 21st", Swordeist travels to Earth with Odile serving as her guide. When they run into a Flying Hermit, Swordeist tries to battle it, only for Odile to fling her out of her unit. Becoming depressed, she asks Odile to mercy kill her; when she refuses, she yells for help, which is answered by El Dorado. He puts her back on her unit, upon which she charges forward to attack the Flying Hermit. After the battle, she leaves out of embarrassment when Odile takes her Try Coins and is helped back up by El Dorado. She would eventually return to the planet and is seen dueling Jin during one of her visits. 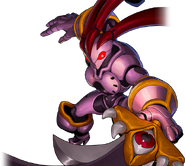 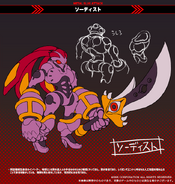