Sylfie is a character introduced in Metal Slug Attack.

Sylfie is the younger sister of Millefie. She is a stark contrast to her older sister, being very social and interactive, while Millefie is known to be extremely reclusive in the army. She is particularly fond of social networking and hopes to gain many followers. While fond of taking pictures and sharing them on social media, is also careful to avoid leaking sensitive information to the enemy with her pictures, although her activities are often frowned upon by the other members.

Like her older sister, Sylfie is a talented mechanic, having developed the Fight Cab, a melee-based variant of the Iron Cab.

First appearing in "One Cut", Sylfie texts with Millefie over her upcoming operation and promises to bring her older sister a souvenir from the battlefield. She is accompanied by Padwah, who had been transferred to protect the Fight Cab. Alongside with taking pictures herself, she also tasks her with taking some on her behalf.

She later accompanies Emma on the Fall Climber, where they repair damage inflicted to it by Ulala. She also notices her sister has gone missing and wonder where she went. 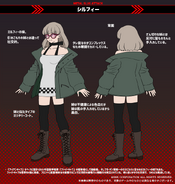