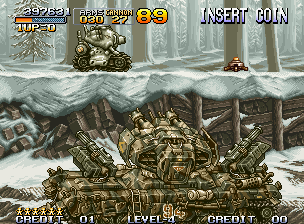 Tani Oh is a prototype heavy artillery tank armed with powerful, twin-barreled cannon capable of devastating large areas without much effort; these twin guns are possibly an experimental railgun, since their shots are instantaneous light bolts and the turret, instead of ejecting the expanded casings, discharges smoke and heat from the vents on its back. It is also equipped with two turrets on each side, both with a minigun and a mine launcher, to cover the tank in short range. Only one unit was produced, being used by the Rebels for testing purposes in the Käthehirt Valley region.

Tani Oh is a very simple, yet deadly boss. It moves in a lower platform compared to the player, so it will always be below the player, forcing the player to jump constantly (without the Metal Slug) to shoot at it. Its main weapon is the Andro Cannon, which not only covers a big area, but is also very fast. Tani Oh also launches mines everywhere in the player's path and will sometimes use its miniguns to attack the player. The airborne mines can be relayed back at Tani Oh for slight damage by shooting at them from above. When both turrets are destroyed, Tani Oh will constantly attack with its cannon, which goes a lot faster on its own, making the battle a lot harder.

Tani Oh appears in Metal Slug: 2nd Mission for Missions 23 (The Tundra King) and 24 (The Ice Queen). The fight with Tani Oh has two phases. The first phase has Tani Oh tossing range sensitive land mines onto the ground and occasionally shooting a rocket in three directions (center, diagonally left, and diagonally right). The second phase has the Rebels coming in from both sides and tossing grenades. Its Andro Cannon also fires laser that goes vertically upward, which is dragged as Tani Oh moves. The laser is able to hurt the Rebels, and they sometimes drop a gas tank as they are killed.

Tani Oh appears as the third boss. It is piloted by Warrant Officer Leta Kanikoja (レタ・カニコージャ). A lone Rebel Soldier is also on board the tank throwing grenades at Marco [1].

Tani Oh appears as a background boss in Metal Slug Defense in the Alaska stage in World 6. Tani Oh is placed in the bottom of screen which makes it very hard to damage it. However, Tani Oh can easily be destroyed via The Keesi II, Cabrakan 's Laser and Crablops' Leg jet engines.

In Metal Slug Attack, Tani Oh is featured as the Monday-Tuesday boss in the Day Specific Mission. Its battle arena is the same as in Metal Slug Defense.

Tani Oh has a special playable variant made for the "Santa Trap" Extra Ops, where its main cannon and mine launcher is facing horizontal in order for to fire its cannons against the enemy units in front. New variants use this design.

Nikita's Solanoid Cannon has the same laser as Tani Oh although with different attacking properties.

An early design of the Tani Oh

A promotional artwork depicting an earlier version of the Tani Oh 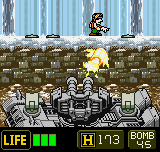 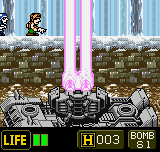