Tarma Roving is one of the main characters in the Metal Slug series.

The son of a distinguished military man, he entered the Special Forces Training School immediately after junior high school. At the age of 20, he joined the PF Squad on a mission to rescue the president, where he met Marco and became fast friends. Upon discovering that Marco had been selected for a counteroffensive in the Great War, he volunteered for action, where they fought through and survived the war together. Following the war, both he and Marco were promoted, with Tarma becoming captain.

In private, Tarma often makes fun of the over-serious Marco, but holds him in the highest regard as a soldier. He builds custom motorcycles as a hobby with a knack that rivals even professionals. Tarma had intended to retire and start up a motorcycle shop following the First Morden Great War, but he was coaxed by his superiors to remain in service. His favorite food is fermented beans on rice.

In Metal Slug 6 and Metal Slug 7/XX, Tarma is best skilled with the Slugs. Slugs piloted by Tarma have the power of the Vulcan boosted by 50%, and Slug health is doubled. He can fix the Slug's Vulcan in one position by holding down the fire button. Also, he will receive twice the cannon ammo for the Slug.

Starting with Metal Slug 7, when outside of a Slug, he can use the Slug Kick move (Special + Fire) to replenish the Slug's armor (or randomly damage it). This only works with vehicle Slugs.

A mugshot of Tarma 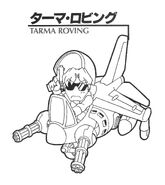 Tarma inside the Slug Flyer 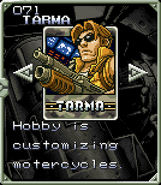 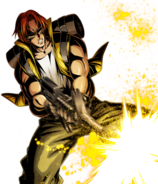 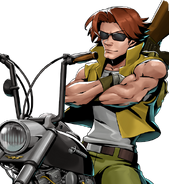