She is an Invader who specializes in telekinesis, using her mind to levitate any object in her sight. She can also call down huge meteors from space to attack her enemies with her powers.

She is one of Odette's partners and looks almost identical to her as she uses her appearance as a reference to her own disguises. Though she can handle herself in battle, she prefers participating in a mission with Odette.

First appearing in "Christmas Wishes", Odette, who is still learning about human culture, learns that it is Christmas and tasks Teleko with finding the "Christmas spirit's tree" to celebrate the human holiday.

Teleko takes her ship to a forested area on Earth and begins to wonder which tree is housing the Christmas spirit. She runs into Chloe, who is on guard duty as the forest is considered to be Rebel territory. Teleko ignores Chloe, who proceeds to attack her. Annoyed by the attack, she defends herself and decides to take all the trees with her. Teleko destroys Chloe's Hodumi++ with her telekinetic powers and departs with the trees in tow, having lifted them all from their roots. 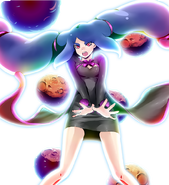 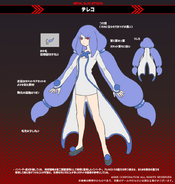