No information
Teresa is a new character introduced in Metal Slug Attack.

A former war orphan, Teresa was saved by the church and was taken care of by one of the nuns who was her benefactor. Upon hearing of her death, Teresa set out to find the true culprit, even using underworld sources to assist her. The transition has made her a skilled and notorious assassin among the underworld populace. She uses machine pistols in combat and also carries some grenades on her.

She appears to have some interest in Vatn.

First appearing in "Strange Town", Teresa is searching for Vatn and arrives at a local town to question the populace. They tell her that they have not seen a man that matches her description, but tell her that their people are disappearing to a monster of some sort. Taking this lead as a sign that Vatn may be around, she is approached by a vampire who paralyzes her and learns why she came. The interrogation is halted by a scream, with a large one-eyed monster attacking the town. Teresa and the vampire take down the Giant Hunter Walker.

After dispatching the Giant Hunter Walker, the vampire tells Teresa to halt her search for Vatn or her life will be forfeit. This leaves her questioning why a vampire is trying to protect Vatn. 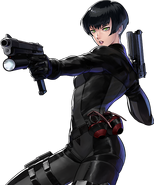 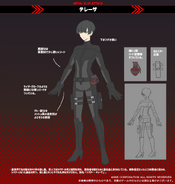