The T-770 Tetsuyuki is the boss of Mission 1 from Metal Slug: Super Vehicle-001.

The Tetsuyuki is a flying warship created by the Rebels for combat, equipped with heavy armor and weapons, earning it nicknames such as Impregnable Castle, Moth of Hell, and Sailor Titan. One of these crash-landed onto the Villeneuve Mt. System, where it was fortified by the Rebels to serve as a base of operations. Some of its weapons are able to function despite the massive damage.

In Metal Slug Mobile 4, the Tetsuyuki is covered in mosses and plants due to prolonged abandonment. Its weapons are still operational.

The Tetsuyuki, despite being a gunship, is stuck on the ground, now serving as a makeshift base to keep outsiders away. It has a laser cannon on one of its sides, which it uses to charge a straightforward laser beam that must be ducked, or to launch a ground wave that can be jumped. For the majority of time, it will fire bursts of arching energy shots aimed at the player, which can be easily dodged. It can be taken down with around 25 grenades.

Also, look out for the yellow Special Forces Rebel who runs out from the top of the plane. Killing him drops either grenades or Heavy Machine Gun ammo.

The Tetsuyuki appears as the game's first boss. It is piloted by Private 1st Class Sosuke N Kagamihara (ソウスケ・N・カガミハラ)[1].

The Tetsuyuki appears in both games as the first boss in the respective modes Sortie and Attack. Its only attack is its laser cannon that can pierce through every deployed unit. It cannot be obtained without using cheats. If the player gets access to this unit, it will instantly be deployed at the base. However, the only sprite that will appear is its own laser cannon.

In Metal Slug Attack, the Iron Cab and its variants use the Tetsuyuki's laser cannon for their special attack. 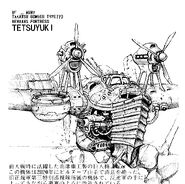 A closer look on the Tetsuyuki