The Iron is the boss of Mission 3 from Metal Slug 4.

The Iron is a customized version of the Iron Nokana created by Amadeus Syndicate. It is equipped with tank treads which allows the vehicle to move faster on any terrain, and has even more improved armor and firepower. Unlike the original Iron Nokana, the Iron lacks any hidden weapons underneath nor does it rise up.

According to Metal Slug Defense, the Morden operating the Iron is a fake, possibly being one of Amadeus Syndicate's Morden Robots that appear in the final mission.

In Metal Slug Attack, the Syndicate creates the Iron Fortress, a more heavily-armed version controlled by an A.I.

There will be always a Masknell helping the Iron in battle. The fake Morden will constantly shoot rockets from his bazooka, and when he doesn't, he will enter the cockpit and fire a series of cannon rounds or homing missiles, open the front plate to use its spinning blade, or try to trample the player with the tank.

Players hit by the front plate when it is opening up will be knocked off to the ground. They won't lose a life, but their special weapons reverts to their pistol. 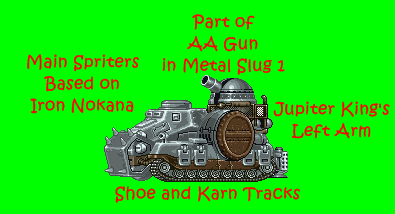