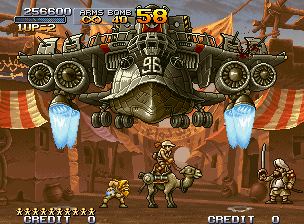 The Keesi II is the first boss in Metal Slug 2.

In Metal Slug X, the Iron Nokana takes its place as first boss, with The Keesi II instead becoming the mid-boss of Mission 3.

The Keesi II is a VTOL bomber meant to provide close air support to ground troops. It is equipped with anti-air guns on its wings and can drop heavy bombs (these weapons are not used in-game), and its size is enough to carry support tanks on its wings. The Keesi is also capable of using its jet engines to burn anything underneath it.

Since The Keesi II is meant to be a support vehicle, it lacks its own ways of attacking. Instead, it can hover safely near the ground to send Arabians after the players. After the plane has sustained some damage, it will lift up a little and use its engines to incinerate the players, while two Rebel soldiers shoot at them constantly. Unlike the Arabians, the players can't hit the Rebels directly, so they'll have to dodge them.

In Metal Slug X, it serves as Mission 3's mid boss, appearing with two Bull Chan instead of the Rebels or Arabians. The tanks will either shoot or drop themselves onto the player and regenerate. A falling Bull Chan can be destroyed to spawn collectible weapons or ammo. Various amount of coins pop from The Keesi II once it explodes.

An excellent tip for beating this boss is to directly attack the two engines first, as these award the player with a considerable amount of points (10,000 for the right engine, 50,000 for the left one) if destroyed before the boss is completely defeated.