The Tiger Slug is a tiger with sabre-shaped teeth. Two Vulcans are placed on its sides while a large weapons container is mounted on its lower back. The tiger normally attacks by firing its vulcan and rocket launchers simultaneously against distant targets. Those too close to the tiger will get swiped by its claws.

Like Scotia Amundsen's camel, the Tiger Slug will carry Growl back to base when he is defeated. 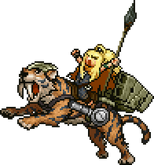