The Toschka Dalanue is the second boss of Metal Slug 4.

This armed tower was created by the Amadeus Syndicate to serve as a vigilance spot and a barrier against anyone foolish enough to cross its path.

The Toschka Dalanue is composed of five segments, with Sector 5 at the bottom and Sector 1 at the top, operated by a fake Allen O'Neil. When a floor is destroyed, the floors above replace the destroyed one.

During the battle, a box containing a special weapon is periodically dropped from the top of the screen. The special weapon may be a Heavy Machine Gun, Rocket Launcher, or Iron Lizard.

The Toschka Dalanue appears as a playable unit in the 1.43.0 update. Here, the Toschka Danalue appears with only Sectors 1 and 2 due to screen size-related issues.

The tower is built by a Miner who, alongside the M-3 Rocket Launch Support Van, has the slowest building time in the game. As it has no Special Attack, the tower attacks with everything: its parachute missiles, both bazooka and rifleman Rebel soldiers, and two shots of the tower's cannon at differing angles.

The Toschka Dalanue returns alongside two new variants, yet all three versions are deployed with Sections 1 and 2. Although the entire tower is seen in the "Destroy the Tower" Extra Ops, Yoshino knocks down the first three sections with her hammer. The Toschka Dalanue this time acts like the Assy Nero where the tower moves off-screen and drops down at the nearest enemy unit. 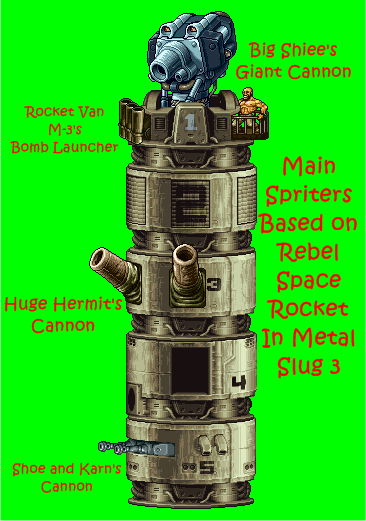