Sergeant in the PF squad

Trevor Spacey is one of the main characters found in Metal Slug 4.

"I'm going to make scrap metal out of you, pal!!" - Trevor's pet phrase

Trevor received his first computer at the age of three as a gift from his parents, and completely understood binary codes and computer languages by the age of seven. During his summer recess from school, he usually worked on creating anti-virus programs for his home-work assignments, still used by his school against growing threats from the Internet. His ability to understand computer languages enabled him to be assigned to the scout regiment of the Regular Army. Finding respect for Marco, he then signed up enroll into the Peregrine Falcons - later on Trevor became to be a Sergeant in the P.F. Squad. There are rumours that after the events against the Amadeus Syndicate he retired to the Regular Army work as a security programmer.

While Trevor plays the same as any other character, his standing melee attack involves kicking his foes with his knifed boots. Unfortunately, it hinders his movement as he either slows down or stops when he attacks.

After the game's events, Trevor and Nadia's whereabouts are unknown, as they have yet to make another appearance in the main series.

Originally a cameo in the game's POW list, he (alongside Nadia) later becomes a purchasable unit. He uses his Knife Boots as his close-range attack and the Two Machine Guns as his long-range and special. When Trevor activates his special, he jumps backwards while shooting. Initially he was a powerful unit, though he was nerfed in a subsequent update.

Trevor returns in Metal Slug Attack, now re-established as part of the main cast (seen as early as the game's opening cutscene). Unit parts of him can be earned by the Daily Login, the POW Shop, or as a random reward in POW Rescue. His new ability is to dodge enemy attacks by jumping back while simultaneously shooting at them. His special form fires Enemy Chasers but ditches his evasion technique.

Abigail, a Rebel officer introduced in the game, has a crush on Trevor, which he is aware of. He tries not to expose this from his peers and is quite terrified of her, trying to maintain a professional relationship as he required her consent before he would work with her due to being on opposing sides. Beatriz, Abigail's younger sister, is also jealous of him, due to taking away her attention.

Trevor is sent alongside Rumi Aikawa to help Howell against the Blaze Brigade and their newest weapon, the Riviere Hyll during Christmas. After driving the enemy out, he is forced into additional work after Howell obtains a report of a group of Regular Army soldiers struggling against the Ptolemaic Army.

After that operation, Abigail sends him a chocolate sculpture of herself tied onto a missile on the following Valentines' Day. He is baffled by the gift despite finding the chocolate delicious. The following year, he is roped into an operation with Howell and Fio Germi to seize chocolates in a town where Iron Fortress is giving them away. Due to last year's incident with Abigail, he becomes terrified of chocolates as he believes that Abigail would have sent one to him, which ends up happening when he picks one up and it's from her.

Trevor makes his appearance in the game during the summer. He is an unfortunate comical relief as he is always forced to work no matter what. During the first summer season, he stumbles into several Martians who bring him to his leader while on the job, who offer to grant him several wishes. However, the other women take notice of this and he is forced to work with Abigail and Beatriz to recapture the Martians. After defeating Rootmars to calm it down, he collapses from exhaustion and gets a hickey from Abigail, prompting Tarma to wonder who gave it to him.

In the next summer, Tarma still insists on finding who gave him the hickey just as boreal matter engulfs the island. Trevor is one of the few who avoid the matter and he stumbles into several Martians participating in an experiment, where he is promptly captured and analyzed. As the Rugname X takes critical damage, he is ejected from the ship, and gets another hickey from Abigail.

On the third summer season, Trevor is forced to work because Tarma won't do the job and collapses from exhaustion in front of a crowd. The local authorities, led by Kelly, mistake him as deceased and chase after Vicky and Chunyan, the two prime suspects in the "murder". After resolving the situation, Trevor finds MS-Alice crying in front of him, and comments that he's slept like the dead after working nonstop for twenty straight days. Vicky and Chunyan decide to take the matter in their own hands by dragging him away due to the trouble he caused them. 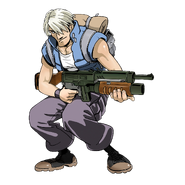 Mugshot in the Soldier Select screen of Metal Slug 4 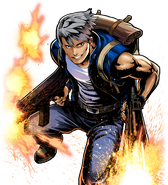