The Tripod is a walking transport machine for the Mars People. Its design resembles a Crab-Tank; it features a sleek, bug-like shell with four connected tentacles at its belly (three as legs and one as the tail) and a singular eye. The eye can fire multiple green projectiles at enemy units. The Tripod summons Mars People for protection.

The Tripod appears in Metal Slug Infinity as an occasional stage boss. Like with all large-scale boss vehicles, the Tripod is also a Slug (rated: SSR) that anyone can pilot.

The Tripod in Metal Slug Infinity 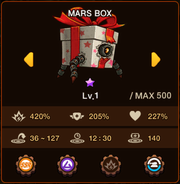