Type:Ant-Lion is a new character introduced in Metal Slug Attack.

A latent mimetic android created by the Amadeus Syndicate, Ant-Lion appears to be a human thanks to its pseudo-living skin, taking on the form of a female researcher. The skin prevents it from using its more powerful energy weapons, so Ant-Lion is forced to attack enemies by awkwardly bashing them with its head. Despite this, it is highly mobile and can easily avoid incoming attacks with astonishing speed.

Although programmed to complete its tasks without question, there appears to be a few glitches that give Ant-Lion some form of individuality.

Once the skin is taken off, Ant-Lion possesses a more robotic look, attacking enemies with energy tentacles. It is also capable of a more powerful special attack by shattering itself into fragments before reforming itself. As a last-ditch attack, it'll send out a small energy wave as it destroys itself.

First appearing in "Try Line 17th", Ant-Lion is sent to a Rebel Army base to spy and collect information. It initially blends in well due to its seemingly unassuming personality, but is exposed after running into Abigail and is chased by Naomi and Chloe. Their attacks have little effect on her skin; seeing that they are close to realizing what she actually is, she bids them farewell as she escapes.

Ant-Lion later oversees a group of newly created Mecha Allens when she bumps into Linhua who was searching for the culprit responsible for stealing Ptolemaic equipment. When Linhua mentions "anman buns" just as Lithos arrives, Ant-Lion mistakes it as a new and mysterious "armored gun" weapon. After a short scuffle, she sends a rampaging Mecha Allen on them before fleeing due to the Ptolemaic soundwaves disorienting her. She later contacts her superiors and informs them of the "anman weapon" and is tasked by them to obtain it at all costs. 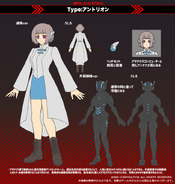