Undo is a new character introduced in Metal Slug Attack.

Undo is implied to hail from the future much like Mello does, as she is acquainted with the future officer. She provides intelligence for the Regular Army and attends high school in return for giving technology to the Metal Device Project.

Most of her body is a cyborg frame and she generates powerful energy shots and lasers to attack her enemies. If the battle becomes too dangerous for her, she simply walks back to base, albeit in a somewhat upset manner.

First appearing in "Task Force 17th", Undo partakes in an operation with Red Eye against the Ptolemaic Army. She confronts Melvina and Phoebe, the former too distraught over destroying some historical ruins to prove her loyalty to Mira. Phoebe sends a Gildron+ after her but she easily destroys it. She takes notice of Melvina's plight and reveals a hidden backdoor to the ruins, even offering to feign a retreat to make it look as if the Regular Army was being repulsed. Melvina eagerly takes the offer and Undo "retreats". On the way back, she finds another Gildron+ and prepares to fight, only to be surprised when Red Eye pops out, having commandeered it from the enemy forces. She then boards the Gildron+ to return to base to finish up her school work. 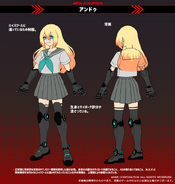