The Unsigned is a new character introduced in Metal Slug Attack.

Known as simply Unsigned, it is a monster whos true identity is unknown. It describes itself as a former wandering Earthling and is acquainted with the Professor. It takes on the form of a giant skeleton clad in ancient robes. It has its own army called the Bonenoid, created from using the bones of fallen human soldiers, which it can deploy and summon to fight; rifle-using Bonenoids as covering support, and shield-wielding Boneonids as frontline protectors.

Alongside its Bonenoid army, the Unsigned also carries a powerful revolver on a shoulder-strapped holster.

First appearing in "Try Line 20th", the Unsigned learns that the Regular Army has taken a stone from an "old friend" of it. Having been given Marionette for the operation, it has her warp into the stone's location. The two surprise Midori, who was trying to investigate the stone and was about to sleep. The Unsigned takes the stone from her and they warp out. Midori chases after the two in an attempt to reclaim the stone, but is defeated. The Unsigned reveals part of the stone's history; impressed with the young mechanic's resolve, it shows her a fraction of its power before leaving. 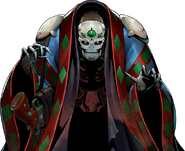 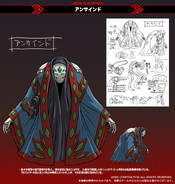