Utan is a support character from Metal Slug 3.

He is found in a cage in two places:

Once freed by destroying the cage (either with a shot or melee attack), he will assist the player by firing short bursts from his Mac-10 submachine-gun at attackers. Unfortunately, he is less than a perfect shot, and will often stop to sleep, eat bananas, pick his nose, or scratch his private parts. The Mac-10 bullets are also very weak, and while one is sufficient to kill a Rebel Soldier, they are next to useless against the two most common enemies he comes up against: Chowmein/Ohumein-Congas, and zombies.

Like Hyakutaro, he will run away if the player is killed or zombified; however, Utan is able to catch up with the player as the screen's left side pushes him forwards.

Utan's sprites served as the base for the "Monkey Transformation". If shot by a Scientist, the player will be turned into an edited Utan, featuring the transformed character's hair, jacket, etc. This transformation enables the player to jump greater heights than usual, hang from railings, and use a Mac-10 with infinite ammo. It can be reversed with a serum dropped from a killed scientist.

Utan and the transformed monkeys appear as a playable unit. Utan himself attacks by rapidly firing his Mac-10. Fio and Marco attack on the ground while Trevor and Nadia attack above ground by hanging on the ceiling.

A variant called the 15000000 Utan Cage was released for the game's 15 million downloads. A Miner places the cage as a barrier. When the cage is destroyed, Utan first runs back to base and then stays put. He'll fire as many rounds as possible before leaving the battlefield.

The Golden Utan is able to dodge attacks by leaping forward while firing downwards. Their bullets can stun and poison enemy units. Unlike the regular Utan, who is an individual, this variant is a subspecies. The Rebel Army had a large number in captivity until one Golden Utan became proficient at weaponry, released all the others, and stole the Golden Knight Tank. 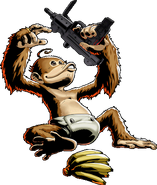 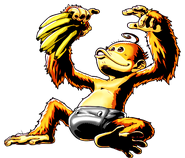