The Valerian Bears are new characters introduced in Metal Slug Attack. They debut in the "Protection of the Fortress" Extra Ops.

The Valerian Bears are weapons created by White Baby. By using a special hologram, a normal teddy bear is grown to a bipedal monster, larger than the average human and bear. The bears have their own personality: Viola is the smartest, Rosa is the girliest, and Bubu is the most aggressive.

When their health is depleted, the hologram projector goes haywire, and the bears overgrow to the point of their fluff spewing over their flesh. They then engage a Metal Slug Attack to the nearest enemy.

Due to the popularity and strength of the Valerian Bears, the Amadeus Syndicate has experimented with implanting their AIs onto other machines, such as Shoe & Karn and their Space Tank.

Viola: The purple bear. She's the most torn one of the bunch. Viola specializes in army protection and melee attacks.

Rosa: The pink bear. She wears a fanny pack, hat, and shorts. Rosa specializes in long-range attacks, tossing bombs from her pack. Rosa would eventually receive an "upgrade" by White Baby making her function similarly to Viola for the duration of her prank on the Iron Fortress.

Bubu: The red bear. She wears a fanny pack, bow, and a skirt. Bubu specializes in poison, as the bombs she throws has a chance of poisoning her enemies. 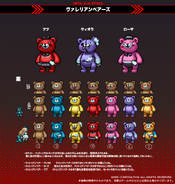