Virginia is a new character introduced in Metal Slug Attack.

Virginia is a member of Allen Platoon, led by Allen O'Neil. During a mission against the Space Army, she contributed to preventing them from freezing the continent. While in the process of dismantling a freeze bomb, an accident occured in which she developed a heat-absorbing constitution, absorbing all the heat around her while emitting extremely cold air in the process. She was forced to stay away from the front lines for a while until her custom suit was ready, allowing her to control her new power.

The suit has two forms - an active state that turns her hands into massive ice fists to both punch enemies and channel cold air. If the suit becomes critically damaged, she ends up turning into an ice rock. There is also an inactive state that allows her to walk about like a normal person.

She is innocent and well-liked, fully loyal to Allen. She is protected by a group of bodyguards - hired mercenaries known as the Ice Hell Independent Unit. Originally they were fearful of her due to her constitution, but after working with her, they took a liking to her innocence and all members of this unit respect and love her.

First appearing in "United Front the 39th", Virginia and her unit attend a party hosted by Fluffy. Fluffy's attempts to put the group in a partying mood doesn't go so well, so Virginia apologizes to her. As Fluffy begins to sing, with part of the lyrics mentioning "heat", Virginia takes the word literally and tries to help by cooling the room down, but her unit decides to handle the task for her. Before Fluffy could sign again, a United Front alarm goes off and Virginia is informed of the situation by other members of her unit, rallying them to battle. During the battle, she comes across a monkey and apparently understanding it, ordered it released and caused most of the monkeys to leave alongside it. She then tries to give her coins to her soldiers, but finds it troublesome to do so in her suit and exposes her hands, causing the surrounding area to freeze in an instant. As they try to frantically clean up her mess, Fluffy arrives and tries to cheer them up with a song but is rejected. Virginia then tells her she would be willing to listen, much to the aspiring idol's delight. 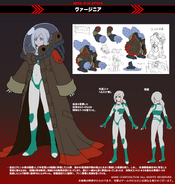