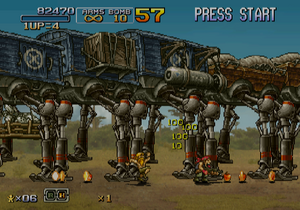 The Walking Locomotive is a Rebel vehicle from Metal Slug 6. It is a moving train with legs that appears in the game's first mission.

The Walking Locomotive is a vehicle developed by the Rebel Army to send supplies to the soldiers on the front line. After the destruction of the Supply Train in Metal Slug 2/X, the Rebel Army needed a new means of transporting supplies. The result was this tall and very well armored walking train.

A modified train, the Walking Locomotive is armed with several heavy weapons, backed by Rebel Infantry members providing supporting fire. A few sections have large turrets that fire homing rockets. Destroying some sections of the vehicle will drop supplies such as food, ammunition, or even POWs; one section in particular provides an SV-001. It is very long, fast, and heavily armored and may require two players to destroy all of its section. A Heavy Machine Gun, Grenades, and the SV-001's weapons can tear it up easily. Destroying the entire Walking Locomotive causes each section to drop tons of coins.

Only the caboose with the turret appears as a playable unit. As such, they are called in the game as Cabs. They are smaller and each contain a weapon in its undercarriage.

The Iron Cab returns as an SSR Slug with the same appearance as in Metal Slug Attack. Instead of holding a weapon inside, it deploys Rebel units by dropping from its underbelly.