Wendy is a new character introduced in Metal Slug Attack.

Wendy is a member of Aileen's pirate crew, serving as their primary mechanic. She maintains all of her crewmates' weaponry, including her own combat kendama. It is a special weapon she made herself that can attack with multiple attributes, keeping their opponents on guard.

She has a cheerful and optimistic personality which her crew enjoys, and as such, she essentially sets their mood too.

While out on a mission, she met Scotia Amundsen. They appears to be on good terms with each other.

First appearing in "Pirate Christmas", Wendy gathers the pirates and announces a contest to bring Aileen the best presents in return for a smile and a laugh from their boss. Participating in the contest herself, she infiltrates a Rebel Army base, having been tipped off by Scotia. As they search for loot, they instead find blaze-themed weaponry and are attacked by Grazia. Wendy uses her combat kendama to flee from the base alongside Scotia, running off with plenty of treasures.

After Aileen accumulates enough wealth, she tasks Wendy with creating some new equipment for part of the crew, which she does by creating the Shark Armor, which suits the female pirates well. As the crew celebrates on the shore with a feast, they are set upon by Invader zombies. Upon clearing the first batch of zombies out, Wendy accompanies Aileen and the female pirates back to the ship to party. 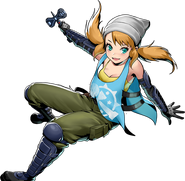 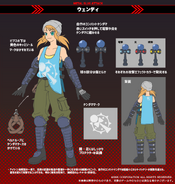