Seirah (nicknamed as Whip) is the newest member of  the Ikari Warriors Team. She marks the official debut in the Metal Slug series in Metal Slug Defense.

Just like Ralf and Clark, her past is best to remain a mystery. Rumors about her past include working as an assassin for an unespecified corporation, deserting, and changing her name to enter the Regular Army. She is eventually assigned to Heidern's mercenary unit under her current name, Whip. When she was new, Ralf used to call her Muchiko (Japanese for "Whip Girl" or "Whippy"), a nickname that she claimed she didn't like. She is also known to enter fighting tournaments alongside the rest of her team, destroying the corporation she used to work for in the course of those. She is a calm and pure-hearted girl that is very confident about herself. She has found hopes for a better future and being happy once again with her squadmates Ralf, Clark and Leona.

She was sent by Heidern in order stop The Union that had gone on a rampage on the city. This mission also gave her the chance to test her newly modified whip that and her golden revolver.

Due to partaking in a Halloween party, Whip ends up getting kidnapped along with Percier to serve as participants for the party hosted by Beatriz and Dolores, although she is allowed to leave once the party concludes.

In the first Halloween, Whip hires Vatn to help him track down a vampire. On the way, they encounter Caroline, Percier and even MS-Alice who were helping the vampire, with each member joining the little group as they are defeated. After defeating Alice, Whip informs her that if she has a problem, she should bring it to Marco, as she is capable of standing for what she believed in.

Following the party, Whip teasingly tells Vatn to stop worrying about Aswang and asks him to buy something for her, which she does.

Whip in King of Fighters 99

Whip in King of Fighters XI 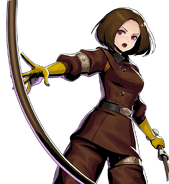 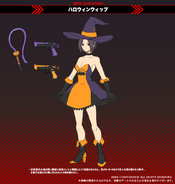