Lieutenant Wired (or Lt. Wired) is the PHANTOM Squad's second-in-command and the boss of Mission 26 (Decoy Strategy) from Metal Slug: 2nd Mission.

Lt. Wired plays in a similar manner to Allen O'Neil, jumping over platforms and tossing his weapons to the player. In Lt. Wired's first phase, he either shoots his two guns in different directions, in a diagonal, or by making an upwards spread of bullets.

Once he takes enough damage, he dons body armor and jumps toward the middle of the stage, firing eight lasers at once. His second phase starts by throwing grenades at a distance or by hanging a wire at the middle and tossing grenades left and right. After a second onslaught of bullets thrown at him, Lt. Wired falls down, but not before dropping some grenades around him as a last-ditch effort. 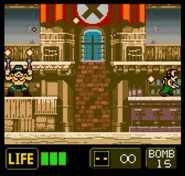 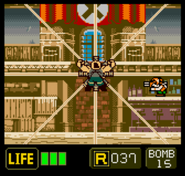 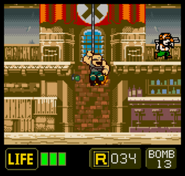 Lt. Wired in his second phase.
Community content is available under CC-BY-SA unless otherwise noted.
Advertisement