Commander of the Guardian Unit

Despite their friendship, Anastasia I notes that their relationship is similar to oil and water.

First appearing in "Task Force 12th", Zahara is blessed by both Anastasia I and IV and is bestowed special wands by both high priestesses. She is initially worried about her new role, which Anastasia I notes and subjects her to "special" training against the Rebel Army's Frozen Vortex. The training allows her to clear her mind and she successfully completes her training, returning to the temple with Anastasia I. When Anastasia IV begins scolding her great-grandmother for causing unnecessary worry, Zahara stands up for Anastasia I and starts arguing with Anastasia IV over her worries that she is sending her friends to die in her name.

When an demon in the desert starts causing trouble in the area, Zahara decides to handle the situation herself, only to run into Damian, Achetto and Sally who were also dealing with the machine. She reluctantly works with them in destroying the weapon and ponders if she could defend Anastasia from Mira's lackeys in the future with her own strength. 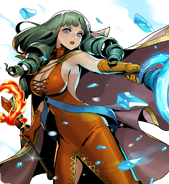 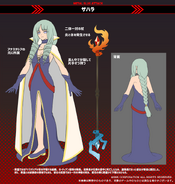